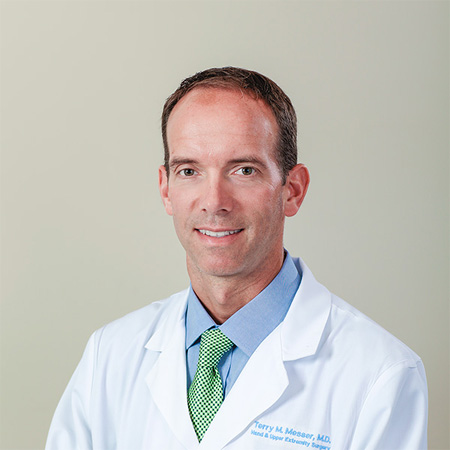 Dr. Terry Messer is a native of Reading, PA. He received his doctorate in medicine from Northwestern University Feinberg School of Medicine in 1995. This was followed by an internship and residency in Orthopaedic Surgery at Northwestern University Feinberg School of Medicine in Chicago . Dr. Messer completed his fellowship at the Christine M. Kleinert Institute for Hand and Microsurgery in Louisville, KY. Upon completion of his hand fellowship, Dr. Messer joined the Department of Orthopaedic Surgery at University of North Carolina at Chapel Hill School of Medicine in 2001 as a hand and upper extremity specialist. He also practiced at Wake Orthopaedics until 2006.

Dr. Messer is a fellow of the American Academy of Orthopaedic Surgeons and a member of the American Society for Surgery of the Hand. He is the past President of the Southeastern Hand Society and past President of the North Carolina Society for Surgery of the Hand. Dr. Messer is President of COAN (Cooperacion Ortopedica Americano Nicaraguense), an organization whose goal is to improve the quality of orthopedic care in Nicaragua. He has served as team leader on several medical mission trips to Nicaragua. He is board-certified in orthopedic surgery with additional certification in hand and upper extremity surgery. He is married and has three children. His hobbies include tennis, running, and skiing.